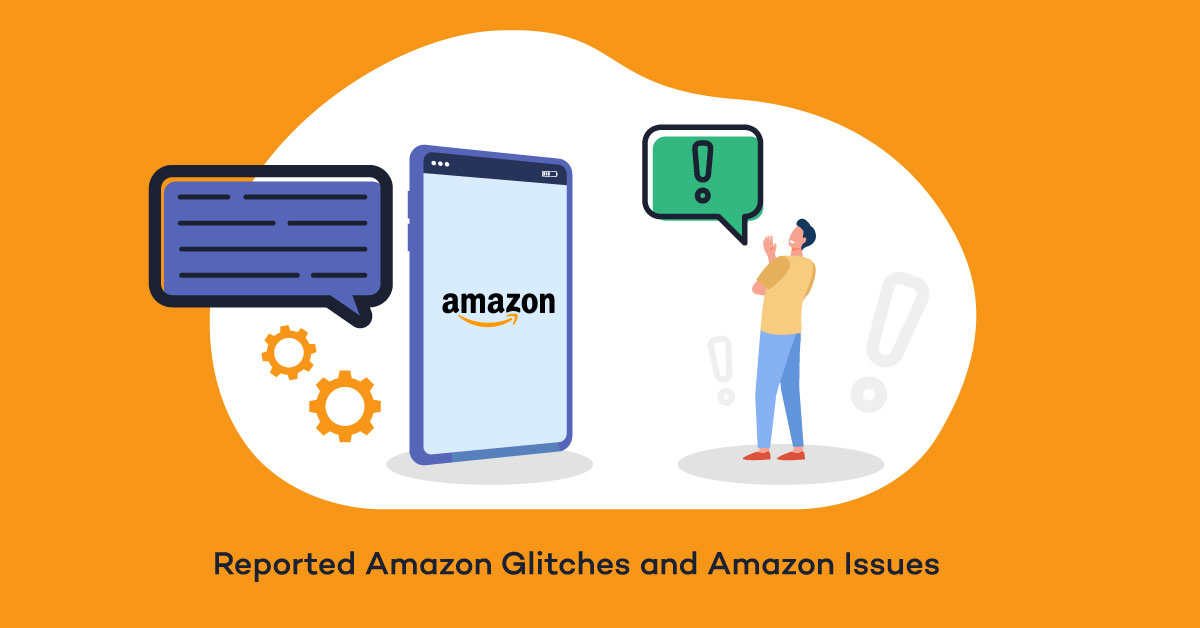 Although price glitches have been a recurring concern with Amazon, there is no conclusive or updated information about its impact on sellers. To date, no available statistical data focuses on Amazon glitches and its impact on Amazon businesses.

However, it is safe to surmise that based on sellers’ inquiries and complaints, system errors and glitches are affecting their Amazon business operation in terms of listing optimization, sales, logistics, brand registration, customer feedback, engagement and so much more.

From a macro perspective, system glitches, including Amazon glitches in 2020, are responsible for customer frustrations and decreased store engagement. In general, these eCommerce system issues led to 40% of online shoppers unable to complete their transactions.

Among the said customer segment, 62% had to ditch their shopping experience due to system glitches, while 52% transferred to competitor websites or other online selling platforms.

Here are some of the recently reported Amazon glitches and other issues. These Amazon issues are not only exclusive to Amazon US, other third party merchants, and clients outside the United States have also experienced some of the issues outlined below.

The majority of the Amazon issues mentioned below came straight from Amazon sellers active on Seller Central Forums, and those issues reported by news outlets.

According to many Amazon sellers, there were major concerns about product listings being blocked for alleged potential high pricing errors or price gouging.

Based on the information shared by Seller Snap clients and sellers in the Amazon Seller Central Forum page, the pricing of the blocked listings was never really altered, and yet listings were blocked by Amazon. One seller pointed out that their pricing was well below their competitors.

Amazon Selling Partner Support confirmed the notion of an Amazon glitch, a response email mentioned that there is “a technical issue currently that is impacting sellers listings in regard to pricing and our engineers are working hard to resolve this as quickly as possible.”

Another infamous Amazon glitch in 2020 concerns the delay of grocery deliveries. Unlike the previous Amazon issue, the system glitch reached news outlets and was published online.

In a published article by Bloomberg, it detailed that a technical glitch affected online grocery orders through its “Whole Foods and Amazon Fresh delivery services.” The severity of the glitch also disrupted Prime Now orders, according to an Amazon memo as reported by Bloomberg.

Some Amazon users reported that they experienced an Amazon glitch when using the Seller App. The majority of the users were complaining about mobile login issues and being unable to press specific buttons on the Amazon Seller App.

While others tried messaging tech support, some Amazon sellers discovered a workaround for this type of Amazon glitch. The proposed solution of some sellers included app deletion and the reinstallation of the application after a few hours.

Some Amazon sellers noticed that there was an issue with Amazon’s “Add to Cart” button when used via smartphone. While using another account, some sellers tried to add their product listing to the cart but to no avail. Instead, they received an error message: “Failed to add an item to cart.”

Amazon sellers reported an Amazon issue concerning the system’s preference for FBM sellers over FBA sellers. There was a lot of talk among FBA sellers about the issue, especially because their Amazon Buy Box Winning rate was dropping.

There was a lot of speculation surrounding the Amazon issue, but the recurring premise emphasized the impact of the COVID-19 pandemic and the ability of Amazon to process voluminous orders during statewide lockdowns and quarantine protocols.

Thus, prompting Amazon to make an alleged tweak to their Algorithm that resulted in some FBM sellers being awarded the Buy Box over FBA sellers.

Some of the Seller Snap clients noticed discrepancies in Amazon’s data. There was an inconsistency between the Marketplace Web Service API, Amazon Price Change Notifications, and the data shown on the product detail page. However, Seller Snap managed to make a workaround for this repricing concern.

An interface update done by Amazon caused a real ruckus among sellers. The main issue (according to sellers), was the disappearance of “Sales Summary” from the seller’s dashboard.

Most sellers find the said summary report as invaluable and would like to revert to the old Seller Central Home Page layout. However, Amazon in its response stated that “there is no option to go back to the old version.”

Some sellers also reported an Amazon issue concerning the sudden drop in their search ranking for a particular keyword. Although others have associated this concern with Amazon’s algorithm change, other sellers believed that a potential Amazon glitch may have caused the problem.

Another issue brought up by Amazon sellers in the forum was the lack of “Partial Refund” on the new form. Apart from that, sellers were complaining that the refund form has no area to write a note for customers.

Additionally, sellers also noticed that the new form does not have the cost amount for the shipping charge paid for prepaid returns.

An Amazon seller shared his concern about his experience with a listed product whose brand name has been changed from Intel to Epson due to an ASIN error for ASIN number: B005LLBJ9Y. This concern was shared on the Amazon Services Seller Forums page.

The forum post with the heading “Amazon catalogue error/glitch caused a copyright strike and it seems I might lose my account over this.” Since the brand has been mislabeled as Epson, Amazon has suspected the seller of copyright infringement for illegally using Intel’s logo.

The forum post created by “Standard of” detailed that the transaction was done through Amazon Italy.

Last December 2021, a glitch in Amazon Web Services (AWS) was reported. It was considered one of the worst outages ever. According to Amazon, a network device issue led to the outage resulting in multiple issues, including Amazon’s retail operation during the holiday shopping rush.

Due to the glitch in Amazon Web Services, delivery drivers were sent home and packages piled up. Furthermore, the AWS outage also affected a sizable portion of the internet, such as Walt Disney Co. theme parks’ online check-in and online ticket sales.

Back in Q3 of 2021, some Amazon users shared their experience of getting a CS11 error when accessing their cart or accounts via the Amazon shopping app. Although most of the affected users were using iOS devices, some Android users likewise reported experiencing such errors.

Fast-forward to 2022; some people still experience such an error. The primary reason behind the CS11 error is the large amount of traffic on the server caused mainly by a growing number of visitors daily. If you are still experiencing this error, the best fix would be to update your Amazon app to its latest version.

Although Amazon glitches and Amazon issues were reported by sellers, this does not mean that you should give up on your dream of becoming a top Amazon seller. Similar to other sellers who found a workaround on certain Amazon issues, you may also perform certain tasks to prevent or resolve future Amazon concerns.

To avoid disruptive issues, you should start your day, week, or month, performing operational and technical checks. Try to check your workflow and Amazon tools for possible issues to avoid unnecessary complications and delays.

One of the common workflow issues you should anticipate is the lack of remote team collaboration. This concern is especially valid for huge Amazon businesses with multiple departments and teams. Sharing information among team members from different parts of the globe can be challenging, which can sometimes stifle a business’s overall performance.

To mitigate this workflow concern, you should hold regular meetings or video conferences. You can also incorporate collaborative software to improve the communication and teamwork of your remote staff.

Furthermore, you can likewise prevent errors or glitches in the workflow of your Amazon business by automating some aspects of your day-to-day tasks. For your product pricing needs, you can use an AI repricer to automate the repricing process. You can decrease human errors through automated repricing while increasing your workflow efficiency.

For errors beyond your control, reach out to expert assistance from Amazon or the creator of the application you are using. For Amazon concerns and support, you may CLICK HERE.

China is the top destination for Amazon sellers when it comes to product sourcing. The…

Whether you are an Amazon FBA or FBM seller, you will need to follow the…

This is a guest post by one of our valued partners,  the views and opinions…