Alibaba vs Amazon: Important Things To Know – Which Is Better?

The resiliency of the eCommerce industry has been tested and proven amidst the COVID-19 pandemic. In particular, two notable eCommerce companies were steadily operating in the middle of the global health crisis and during this new normal period.

When discussing the concept of Alibaba vs Amazon, it can be helpful to know the background and history of each eCommerce company. As you read further in this article, you will learn more about Amazon and Alibaba, including their history, similarities, and differences.

Alibaba vs Amazon: A Brief History of eCommerce Giants 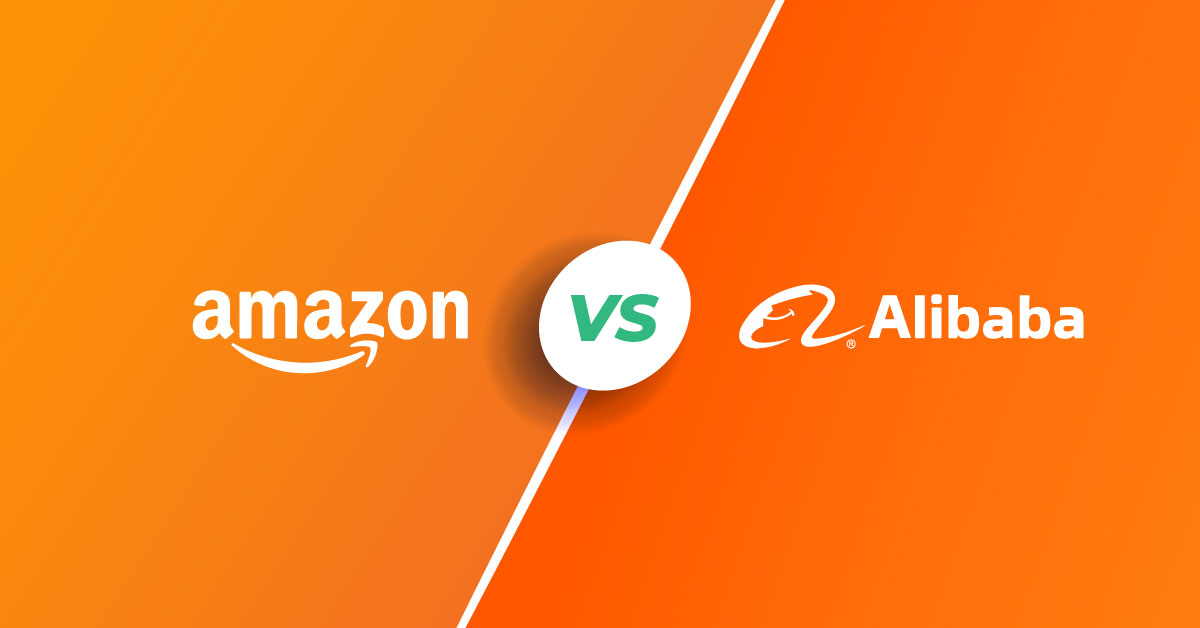 An Overview of Amazon’s History

What started as an online bookstore is now a globally recognized eCommerce company. Since its opening on July 16, 1995, Amazon has expanded its business exponentially.

Amazon’s initial mission was to become “Earth’s Biggest Bookstore,” but over the years, it grew to become the number one retail eCommerce platform in the world in terms of revenue.

Throughout Amazon’s history, the company managed to go beyond selling books online. In August 1998, Amazon announced that it would not solely focus on books but also sell various goods.

The year 2000 marked one of Amazon’s key developments when it launched its marketplace and allowed many third-party sellers to participate in eCommerce actively.

An Overview of Alibaba’s History

Alibaba is considered a trendsetter in the eCommerce landscape, for it is not an online retail website in its traditional sense. It is also viewed by many as the Chinese equivalent of Amazon.

Although Alibaba is perceived as the Chinese equivalent of Amazon, it does not source and keep inventory items and is not directly responsible for fulfillment. Thus, making Alibaba a unique eCommerce company.

The eCommerce giant, Alibaba, was founded by Jack Ma on April 4, 1999, together with 17 others. Its first English-language website is Alibaba.com, which is now a leading global wholesale marketplace.

Like other startup companies that started small, Alibaba had a humble beginning in a small apartment in Hangzhou, China. The initial investment for Alibaba came from multiple investors, which totaled $80,000.

Alibaba.com is now the top global B2B platform emerging from China. Despite fierce competition and skepticism, Alibaba became a global model for the B2B eCommerce marketplace.

Alibaba caught the attention of millions worldwide when it became the world’s biggest IPO in September 2014. It was also the same year Alibaba’s founder Jack Ma became a household name.

Amazon vs Alibaba: Similarities and Differences You Need to Know

The Amazon vs Alibaba discussion will inevitably lead online entrepreneurs and business owners to look into some similarities and differences between the two companies. Here are some valuable insights concerning the Amazon versus Alibaba discussion that will significantly benefit online sellers.

Alibaba vs Amazon on Business Model

In terms of business models, both Amazon and Alibaba started operating without physical stores. Consumers visit these websites with a preconceived notion that products are cheaper and readily available for shipment.

Another similarity between Alibaba and Amazon is both companies offer a premium loyalty program. Amazon has Amazon Prime, while Alibaba offers 88VIP.

On the other hand, Amazon’s business model is unique from Alibaba, for the former sells directly to online shoppers, while the latter mainly facilitates transactions between buyers and suppliers.

Alibaba vs Amazon on Services Offered

Both Amazon and Alibaba offer multiple services to consumers. However, Alibaba is more focused on enhancing the eCommerce experience of businesses, whereas Amazon focuses on the consumer experience.

To put it into perspective, here are some of the services that Amazon offers to its global consumers:

Alibaba likewise offers numerous services to consumers worldwide. Here are some of their notable services:

Alibaba vs Amazon on Company Growth

In terms of growth, Amazon’s current growth and valuation metrics look bleak. The company struggled to generate growth while cash flow turned negative, resulting in a sell-off. However, there is still a great chance the company can nearly match its return of 900% in the last ten years.

While Alibaba’s growth has decelerated a lot in the last two quarters, its growth is still faster than that of Amazon. The company is able to leverage its strong brand and replicable eCommerce strategy.

Alibaba vs Amazon on Revenue Source

Amazon earns primarily from the fees it collects from online sellers, including monthly subscription fees, shipping fees, storage fees, and its retail. On the other hand, Alibaba earns most of its revenue through ad fees and by charging a fee to list on its platform.

Alibaba vs Amazon on Innovations Introduced

Amazon and Alibaba have continually introduced innovations for their respective businesses and consumers. One of the notable innovations implemented by the two companies is the use of drones for deliveries in selected locations.

Regarding Amazon innovations, the Seattle-based company has been busy opening physical stores with advanced features. The tech giant is also improving its fulfillment centers with the help of full-scale 3D simulations, which will enable a more efficient flow of Amazon’s robotic operations.

Alibaba has been leveraging cloud innovations to improve sustainable shopping. The company has fully migrated all Alibaba Group’s systems and operations onto the cloud. Such a move has enhanced the tech giant’s computing efficiency by 30% in CPU resource utilization and 20% in technology deployment efficiency.

Are Amazon and Alibaba Competitors?

At first glance, Amazon and Alibaba seemed to be competitors. Both companies operate in the eCommerce industry and sell consumer goods.

However, if you look closely, each operates in a separate region. Amazon mainly operates in the US and 18 other countries, whereas Alibaba is actively selling in China and nearby Asian countries.

There might be an existing competition between the two eCommerce giants, but it is limited. In fact, Alibaba and Amazon have a symbiotic relationship. Most Amazon sellers purchase items in bulk from Alibaba, which in turn allows more activity in the Amazon marketplace.

Which is better, Amazon or Alibaba?

Choosing between Amazon or Alibaba likely depends on your preference. You can take advantage of Alibaba and its subsidiaries if you wish to operate mainly in Asian countries, such as China, Singapore, Malaysia, and the Philippines.

In contrast, if you wish to sell products in the western hemisphere and selected European regions, you can maximize the reach and influence of Amazon. To improve your sales conversion when selling on Amazon, using Amazon seller tools such as Amazon repricer, product research, and keyword research tools is highly beneficial.

Since there is no direct competition between Alibaba and Amazon, there is no stopping you from using Alibaba for product sourcing and utilizing Amazon as your online selling platform.

Despite the growing popularity of ebooks and audiobooks, printed books are still in high demand….

Whether you are an Amazon FBA or FBM seller, you will need to follow the…